Although support for anti-establishment parties has also been boosted by non-economic factors such as concerns over immigration and crime, it tends to be strongest in regions that have underperformed in terms of economic growth. since the last presidential elections. Departments that performed worse in terms of real GDP per capita growth over the 2017-22 period displayed, on average, higher levels of support for the RN (Rassemblement National: RN) than other regions .

Support for the RN is heavily concentrated in rural or low-income areas in the northeast, center, and southwest of the country. Apart from Seine-Saint-Denis, Le Pen won in nine of the 10 poorest departments in the country during the second round of the presidential election on April 24. 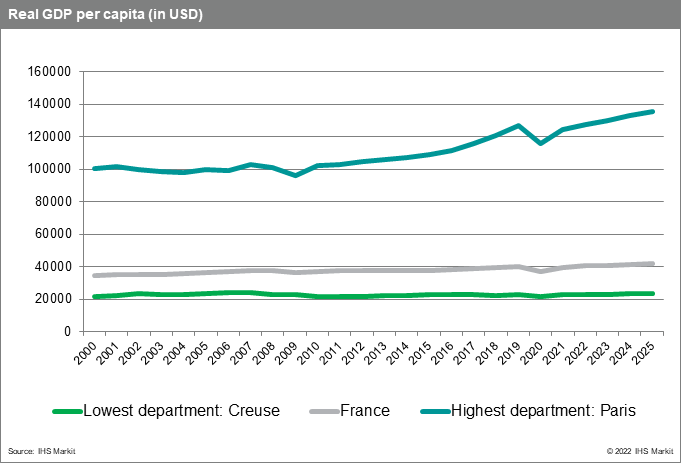 In absolute terms, the disparity of regional inequalities is high with a high concentration of economic activity. Of the 96 French departments, the three richest departments (Paris, Hauts-de-Seine and Rhône) account for 22% of France’s total GDP (although the GDP per capita of Paris is overestimated due to people working in city ​​but live outside the capital). On the other hand, the last 10 departments contribute only 1.3% to France’s total real GDP in 2022.

Regional inequalities are expected to widen over the next five years

While GDP per capita is an imperfect measure of living standards, higher inflation and slower economic growth are likely to have a particularly acute impact on low-income households, at least over a two-year horizon. , increasing the likelihood of violent protests in Paris and worst-performing areas, as well as more frequent industrial actions, in 2023 and 2024.

Projected real GDP growth for 2022-27 should reinforce the trend of 2017-22 (see map below); Haute-Marne, Meuse, Vosges and Ardennes are expected to record negative GDP growth. The share of votes for the RN, or other far-right, far-left or protest parties that could emerge between now and the next presidential election should therefore remain high in these departments. Their performance is likely to be stronger if economic grievances, particularly those related to purchasing power and unemployment, persist – or worsen – throughout the 2022-27 period. 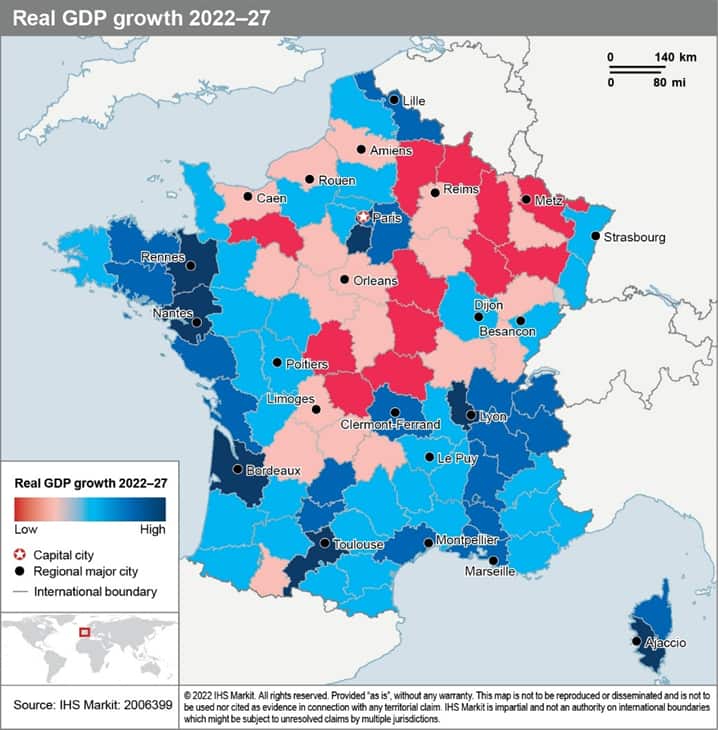 Due to structural weaknesses, high inflation and a lack of major strategic development plans for the poorer departments, regional policy is unlikely to reduce the growth gap with the wealthier departments. , which increases the risk of further substantial changes in the political landscape after the next election cycle.