Trending
TWO recent quotes are worth noting. The first is from Our King at the opening of Parliament: A news report reads that ‘Yang di-Pertuan Agong Sultan Abdullah Sultan Ahmad Shah today urged MPs to maintain the political stability achieved after the MoU signed between the government and the opposition last year, saying this will ensure the success of the nation’s development agenda for the benefit of the people and the country as a whole.

The other is from Hajiji. “That is our goal, to achieve political stability in Sabah so that we can focus on developing the state,” Hajiji said in a statement.

Both stressed the crucial importance of political stability in Malaysia and Sabah to achieve economic progress.

There is no doubt that Sabah has suffered from excessive politics and a lack of attention to economic development.

Ditto at the national level for several years.

The political and economic order is essential to development. Unfortunately, contentious politics has become “the evil twin” because of irresponsible politicians in Sabah.

Sarawak fared much better for good reason. They have better development-minded politicians.

Our King has said what he has to say due to his grave concern over the prevailing highly unsatisfactory political scenario. If the trend is not stopped, Malaysia will face an uncertain future and the economy has already taken a serious hit.

It’s gonna be worse. To put an end to this political farce as our King has urged, Malaysian leaders should unite so that they can deal with the resumption of the pandemic and now the possible fallout from the war between Russia and Ukraine. which could get out of hand.

Sabah is fortunate because Hajiji has, since taking office, emphasized political stability which can only be achieved through political unity.

He did this by being inclusive as a CM for all Sabahans and invited opposition YBs to join him in developing all constituencies.

It is the responsible thing for all politicians to join him – to focus on the development and economic welfare of all Sabahans.

The facts speak for themselves.

[a] positive economic growth of 3.8% to 4% in 2021, even in the face of the raging Covid pandemic and serious global uncertainties.

[b] RM4.4bil of investments flowed into Sabah. 3rd in Malaysia.

[e] At the top of the list, Hajiji changed the mindset of Sabahans from excessive politics to development orientation.

It takes pragmatic leadership and political courage to change the entrenched political system of 35 years and turn around Sabah’s economy within a year.

Sabah’s economic recovery has begun and will accelerate.

Sabahan can expect much more in 2022 and beyond. RM25bil investment is the target for 2022.

Good economic leadership, robust economy and concern for the future generation of Sabahans.

Having a leader who can manage and move the economy forward in a positive way is a blessing that Sabah badly needs.

Having someone who also takes care of the education/human capacity of the future generation is a triple blessing. These attributes do not necessarily go together automatically.

A political leader who possesses both attributes is a rarity in Sabah. Sabahans who have lived long enough will testify to this.

After turning around the economy of Sabah in 2021 and realizing that the future of Sabah depends on the quality of education of our young generation, Hajiji has introduced a host of aids/grants for students and schools who will have long-term benefits:

[a] RM200 per student belonging to the B40 group to cover their examination fees.

[b] Grants to all public and religious schools for the improvement of facilities to improve student performance.

[c] Grant of RM2,000 per year for all Parent Teacher Associations.

[d] Students who have been accepted for university entrance will be granted RM2,000 and for diplomat courses RM1,500.

[e] Computer scholarships will be given to each head of family in the B40 group.

[f] Special scholarships for students who excel in sport at national, national and international level.

[g] Grants for wheelchairs and beds will be provided to the poor by the Department of Social Welfare.

[h] 24 graduates were rewarded for participating in the SMJ [Sabah Maju Jaya] Scholarship program to strengthen the human capital of Sabah.

[i] RM24mil has been allocated in the 2022 budget for human resource development, some of the programs will be done in collaboration with the private sector like Shell.

Hajiji’s investor-friendly policies launched the economic recovery of 2021. Other policies on his part will support the current positive economic trajectory through 2022 and beyond.

Hajiji has the right priority to invest in education aid and human capital as these are the most important basic pillars, cornerstones, for Sabah to achieve meaningful long-term progress and rapid adoption of the Sabah government digitization plan.

With the improvement in economic performance and supported by political stability, I am confident that Hajiji, as a caring CM for the younger generation and the B40 group, will continue and could, with the improvement in the economy and the increase expected government revenue, even expanding the scope of its aid/subsidies and other social programs. 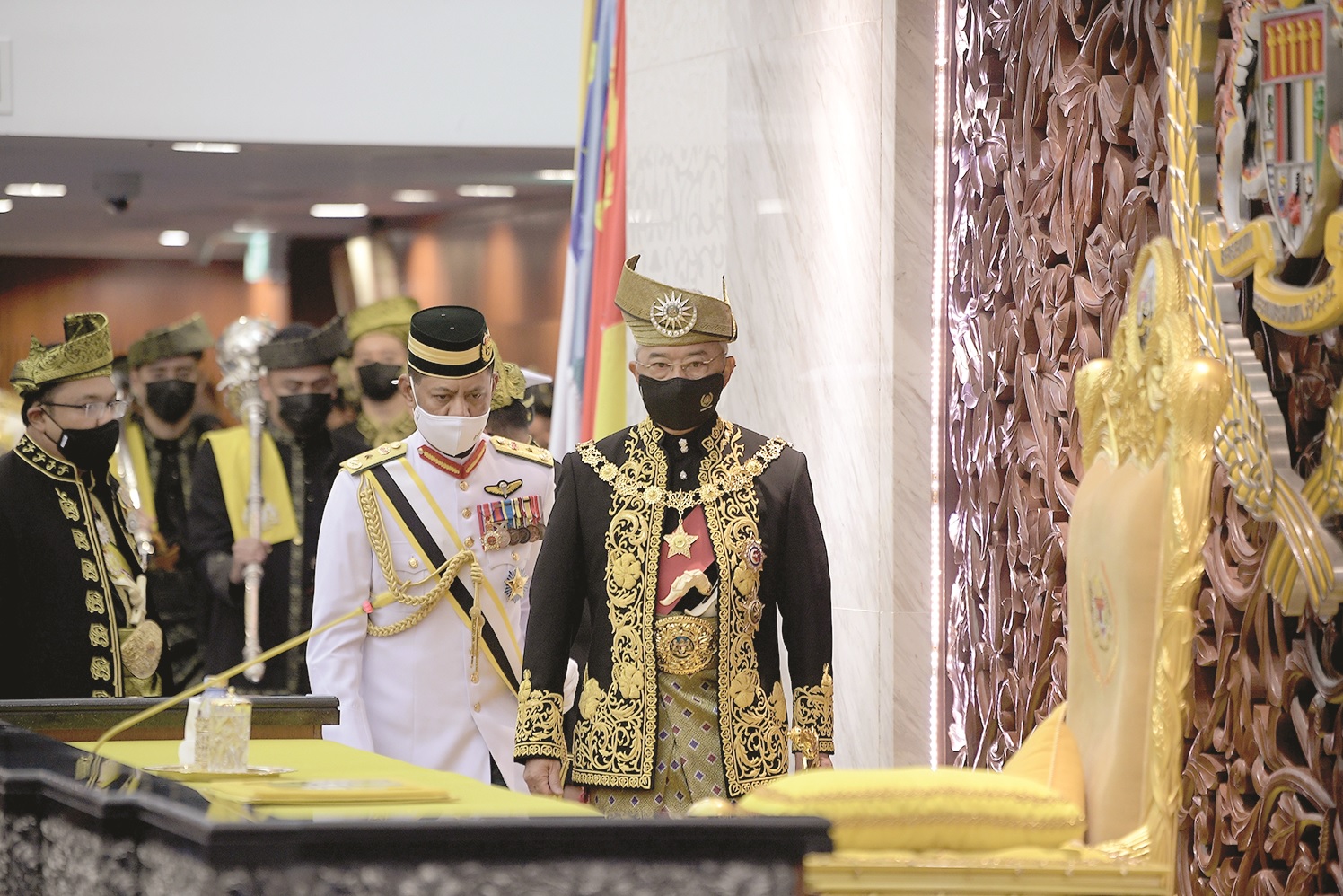 The King officiating the opening of Parliament this week.