The strength and stability of democracy has become a topic of intense debate in the United States and around the world. But what do Americans think of their own democracy? As part of a year-long effort to study “Facts, Confidence, and Democracy,” the Pew Research Center conducted a major survey of public views on the American political system and American democracy. The survey reveals that while Americans largely agree on important ideals relating to democracy in the United States, they believe the nation is failing to achieve many of these ideals.

Here are some of the other main findings of the survey:

1Democracy is seen to work well, but most want “big” changes. About six in ten Americans (58%) say democracy works well in the United States, although only 18% say it works very good. At the same time, a majority support radical changes in the political system: 61% say “significant changes” are needed in the fundamental “design and structure” of the US government to make it work today. 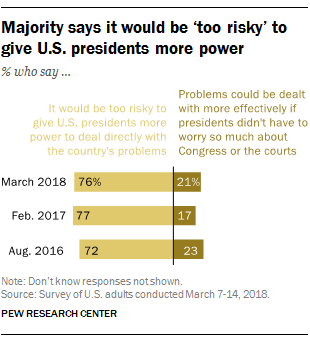 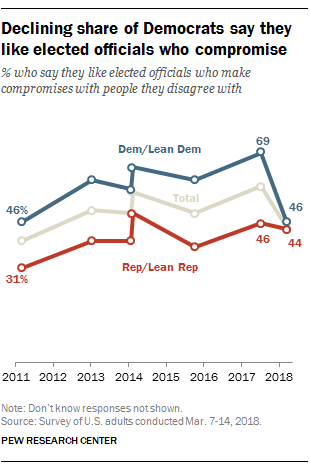 5Most Americans say policymakers should consider the will of the majority even if they and their supporters differ. Three-quarters of Americans say that in a hypothetical scenario, a governor would have to sign a bill that has the support of most people in their state, even if most of his supporters oppose it. But smaller majorities of Republicans and Democrats share this view when the governor is a member of their own party. 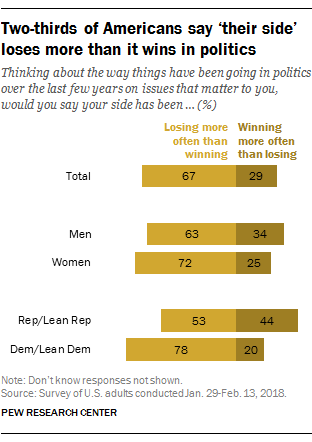 Most supporters say their political side is “losing”. A large majority of the public (67%) say that “their side” in politics has more often lost than won in recent years on issues that interest them. As in the past, this sentiment is less pronounced among those who support the party that controls the White House than the party in power. Despite this, more Republicans and Republican-leaning Independents feel their team has lost more often than it has won (53% to 44%).

7 Government and politics are seen to work better at the local level than at the national level. Two-thirds of respondents (67%) have a favorable opinion of their local government, compared to 35% for the federal government. In addition, almost three quarters (73%) say that the quality of the candidates for the local elections in the last elections was good; only 41% say the same about the quality of presidential candidates.

Carroll Doherty is director of policy research at the Pew Research Center.