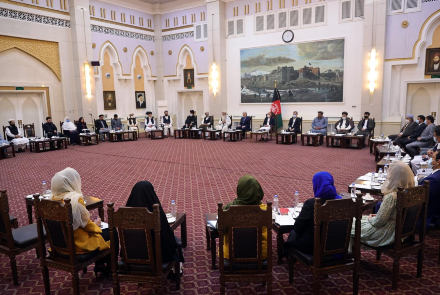 Afghan political leaders who attended a meeting of the High Council for National Reconciliation (HCNR) steering committee at the presidential palace on Wednesday said all political leaders agreed to defend the country’s political system.

They said it was necessary to take practical steps to build national consensus on national issues and that meetings alone would not help to ensure the safety and security of the country.

Abdullah Abdullah, president of the High Council for National Reconciliation (HCNR), at the meeting, said “Afghanistan’s survival is in danger”.

“The truth is that today the survival, security and unity of Afghanistan are in danger,” said Abdullah. “There is no better way than peace.”

“Of course, these meetings bring hope among the population, but these meetings should not be only symbolic,” said Fareeda Momand, member of the HCNR.

The sixth meeting of the HCNR Steering Committee was held at the Presidential Palace in the presence of President Ashraf Ghani, members of the HCNR and other government officials.

15 members spoke at the meeting. President Ghani left the meeting earlier because he was due to meet a foreign guest.

“Mr. Karzai was very busy yesterday, he had meetings with parliamentarians including Mr. Khalili. Any meeting that takes place should give a result as expected by the population,” said Shahzada Massoud, adviser to Karzai.

Although a six-member delegation consisting of former President Hamid Karzai and HCNR chief Abdullah was due to visit Doha after Ghani-led trip to the United States, sources said no discussions had been held. take place on the trip during Wednesday’s meeting.

In April, US President Joe Biden announced that US troops would leave Afghanistan by September 11.

It comes as the last German troops left Afghanistan on Tuesday after nearly 20 years of deployment in the country, German Defense Minister Annegret Kramp-Karrenbauer said.

The German Defense Minister said in a tweet that the last Bundeswehr soldiers “left Afghanistan unharmed” on Tuesday evening.

NATO agreed in April to withdraw at least 7,000 of its troops from Afghanistan.

At the time, Germany had around 1,100 troops in Afghanistan.