Editor’s Note: Josef Gregory Mahoney is professor of politics at East China Normal University. The article reflects the views of the author and not necessarily those of CGTN.

The Information Office of the Chinese State Council has released a new white paper titled “The Chinese Political Party System: Cooperation and Consultation,” explaining how the Chinese political system operates through a united front of cooperation and consultation. multi-stakeholder consultation. It provides new information on party membership and progress made especially since the 18th CPC National Congress in 2012, with particular emphasis on the role of the Chinese People’s Political Consultative Congress (CPPCC).

In total, including the Chinese Communist Party (CCP), there are nine parties in the united front. The following table reflects the data and descriptions provided by the document: 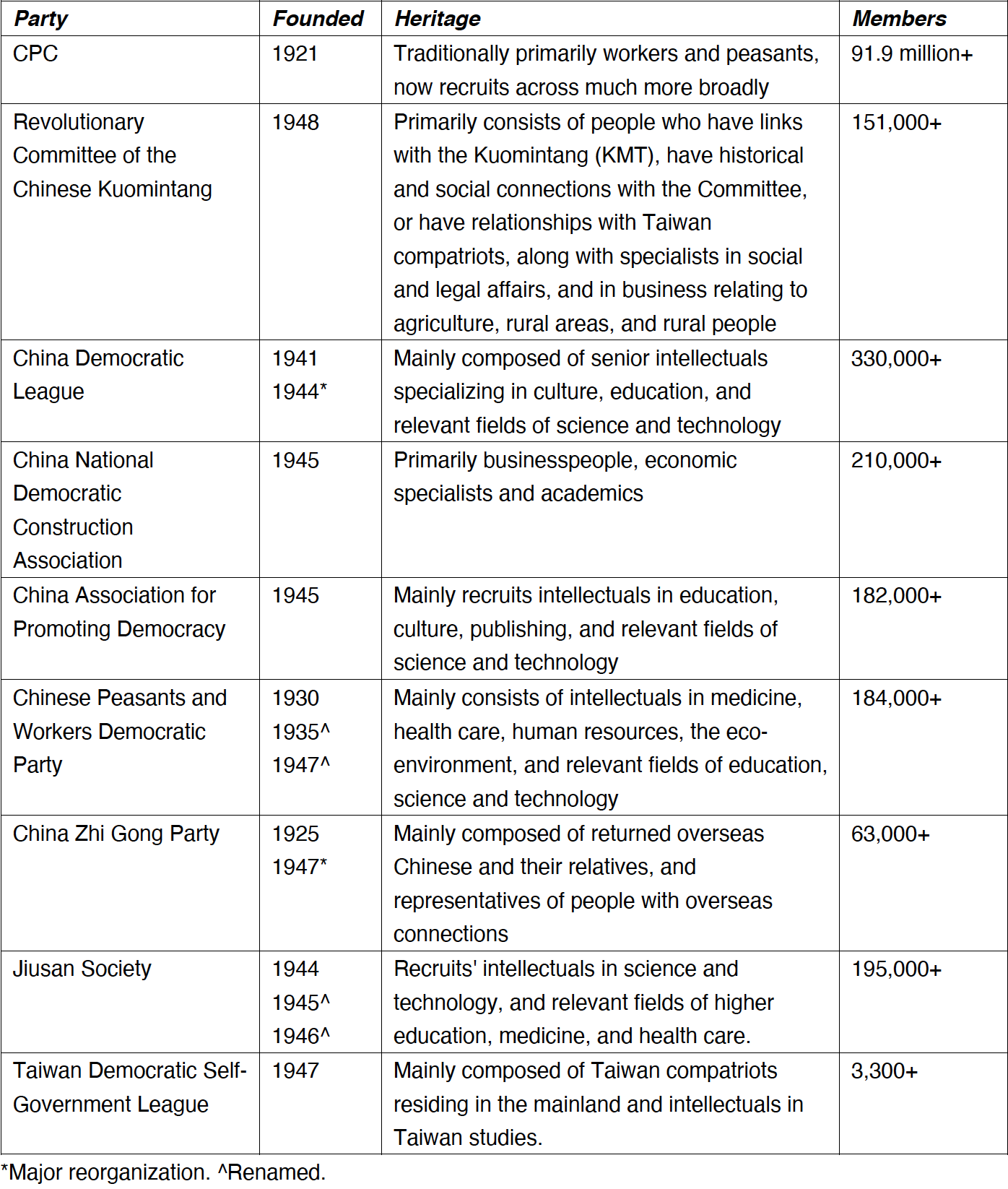 Regarding the role that the eight non-CCP political parties play vis-à-vis the CCP, the white paper contains two key passages.

“Non-CPC political parties participate in state governance under socialism with Chinese characteristics. They are not in opposition, nor are they spectators or strangers. Instead, they participate in state governance under the leadership of the CCP. Their status and their right to participate in the administration of state affairs are protected by the Constitution, which is an important manifestation of popular democracy. They offer their advice and invest efforts on major issues concerning China’s economic and social development, and they have witnessed, practiced, supported and championed the cause of Chinese socialism. “

Additional passages highlight the friendship and support that the parties have for each other, how they supervise each other and how they agree on both the historic mission of national renewal and of building a socialism with Chinese characteristics. .

The document highlights the distinctive features and strengths of the system. He acknowledges that the Chinese system is unique in the world, but argues that it makes sense, having evolved along China’s unique historical path and which, like China itself, is still developing.

He also argues that this system has been an essential element in dealing with major crises in modern China. In its current form, the document argues, the system has four key advantages: 1) it embodies the interests of the widest range of social groups; 2) it reflects the common goals of all; 3) it promotes sound decision making and implementation; and 4) it ensures effective governance of the state.

Of these claims, the second could perhaps be considered the most controversial. But as the document instrumentally argues, through consultation and cooperation, effective consensus can be reached and implemented, including finding the right balance between one-party rule and ‘power rotation issues’. and destructive competition between several political parties ”. This has enabled China “to build a powerful social synergy and to pool all the resources to accomplish major missions for the benefit of the people.” 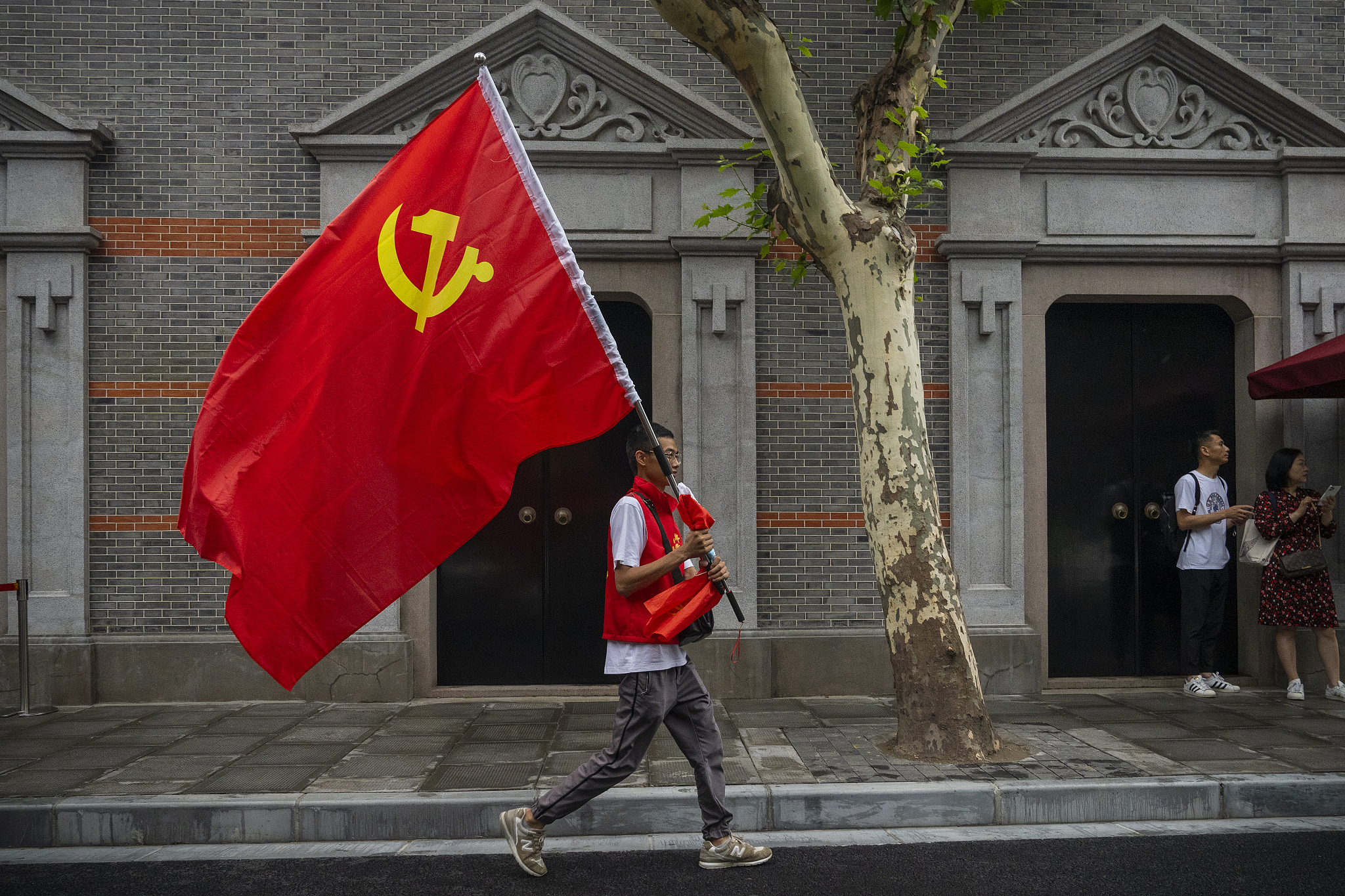 A man carries the Hammer and Sickle Flag outside the Memorial of the First National Congress of the Communist Party of China June 17, 2021 in Shanghai, China. / CFP

A man carries the Hammer and Sickle Flag outside the Memorial of the First National Congress of the Communist Party of China June 17, 2021 in Shanghai, China. / CFP

On the one hand, as the document states, the leading position of the CCP was confirmed by its successes associated with the victory of the revolution and the leadership of economic development and reforms. These capabilities overcame the political and organizational chaos that had left China unable to restore sovereignty in a dangerous and competitive world. By necessity, these capabilities also included the development of China as a modern nation so that it could maintain its sovereignty and the well-being of its people over time.

On the other hand, the document recognizes the positive, even vital role played by non-CPC parties, past and present. These include contributing to the democratic nature of the Chinese system as well as making important contributions to Chinese governance through service within and through various mechanisms for cooperation and consultation.

The main one is the CPPCC. Actually, CPPCC is a national level organization, but there are also local conferences all over China. The CPPCC was first formed in 1949, but its role in the Chinese political system has seen major developments over the decades, especially since 2012.

This is in part due to the new confidence expressed by the current generation of leaders in China’s development path and grassroots systems, who have effectively recognized that the CPPCC is already a positive achievement. This in turn opened the door for further reforms affecting the CPPCC which aimed to improve its function as a key platform for consultative socialist democracy.

However, there are other consultation mechanisms. In addition to local conferences, consultations can take place in special forums and in writing. Again, since 2012, the document notes that at the national level, there have been more than 170 consultative forums, as well as 730 written proposals from non-CPC parties. These especially occur before national congresses and CPC plenary sessions, and in turn, are used by the CPC to shape national policy making.

Additional highlights from the document: Non-CPC parties have made substantial contributions to targeted poverty reduction “they have made 36,000 interventions in democratic oversight of poverty reduction, offered 2,400 written advice to the committees of the CPC and the governments of the 8 provinces or regions over 80 reports of various types to the CPC Central Committee and the State Council. “

In addition, the report illustrates the substantial role played by non-CPC members and those not affiliated with the government. Since 2018, “around 152,000 members of non-CPC and unaffiliated political parties have been deputies to popular assemblies at all levels.”

In addition, “14 hold senior positions in the Supreme People’s Court, the Supreme People’s Procuratorate or in ministries, commissions, offices and offices reporting directly to the State Council; 29 are vice-governors of provinces, vice-presidents of autonomous regions or vice-mayors of municipalities. reporting directly to the central government and 380 are deputy heads of towns, prefectures, leagues or districts; 45 are vice-presidents of the provincial people’s courts or deputy attorneys general of the provincial people’s procuratorates, and 345 are vice-presidents of the people’s courts at the level of the prefectures or deputy attorneys general of the people’s procuratorates at the prefectural level. They have the power to give administrative orders, take decisions and make proposals on the appointments and dismissals of staff within the framework of the managerial responsibilities assigned to them.

The report also recognizes the powerful and positive role that non-CPC and unaffiliated parties have played in national efforts to contain and recover from epidemics, including SARS and COVID-19. He also highlights the key roles they have played in many development projects, including those associated with the Belt and Road Initiative, the Beijing-Tianjin-Hebei region, the Yangtze River economic belt, the region. of the great bay of Guangdong-Hong Kong-Macao, the integrated development of the Yangtze River Delta and Guizhou.